"The survival of our wildlife is a matter of grave concern to all of us in Africa. These wild creatures amid the wild places they inhabit are not only important as a source of wonder and inspiration, but are an integral part of our natural resources and our future livelihood and well being. In accepting the trusteeship of our wildlife we solemnly declare that we will do everything in our power to make sure that our children's grand-children will be able to enjoy this rich and precious inheritance.

The conservation of wildlife and wild places calls for specialist knowledge, trained manpower and money, and we look to other nations to co-operate with us in this important task - the success or failure of which not only affects the continent of Africa but the rest of the world as well."
Julius K. Nyerere, Arusha Manifesto, 1961

Nyerere's philosophy to protect and cherish Tanzania's spectacular wildlife as a prime national heritage is expressed in the high priority the Tanzanian government has given to conservation of natural resources. At independence Tanzania had only one national Park, the Serengeti. Since then 12 more Parks were created, about 4.5 % of the country are National Parks; nearly a quarter is under some form of protection as Game- and Forest Reserves.

Julius Kambarage Nyerere was a Tanzanian politician who served as the first President of Tanzania and previously Tanganyika, from the country's founding in 1961 until his retirement in 1985. 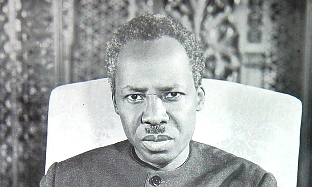 Watch short clips, TV footags and documentaries on and about Nyerere

"The African is not 'Communistic' in his thinking; he is -- if I may coin an expression - 'communitary'."

Julius Kambarage Nyerere as quoted in the New York Times Magazine on 27 March 1960.